Share and Talk About your Favorite Music here. Put us all on to what should be listened to. NO ILLEGAL LINKS!!! 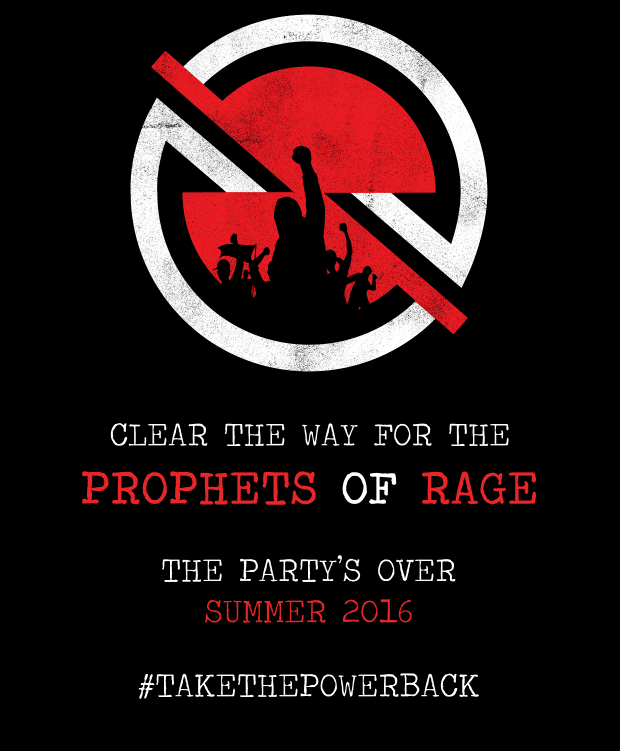 Recently, Rage Against the Machine -- inactive since 2011 -- launched a website counting down to June 1, adorned with #TakeThePowerBack, which also appeared on posters displayed around their hometown of Los Angeles. Naturally, people wondered if Rage was getting back together.

Well, not quite. ProphetsOfRage.com (a website that is no longer loading, as of press time) is actually proclaiming a whole new group. Sources tell Billboard that three-quarters of the storied band -- guitarist Tom Morello, bassist Tim Commerford and drummer Brad Wilk -- are joining forces with Public Enemy’s Chuck D and Cypress Hill’s B-Real to form a supergroup called Prophets of Rage (referencing a Public Enemy song of the same name from the 1988 album It Takes a Nation of Millions to Hold Us Back) to perform songs by all three bands. Rage vocalist Zack de la Rocha is not involved.

The band's debut is set for Hollywood Palladium on June 3, with a show at L.A.'s Whisky a Go Go planned as well. A 2016 summer tour is also being considered.

Rage Against the Machine’s full lineup has not performed since a July 2011 show at L.A. Rising fest.

Worth noting: With election season ramping up, these self-anointed prophets should have plenty of rage to pull from.

Rage Against the Enemy on the Hill I'm excited about this. I saw Rage and Cypress Hill WAAAAAAAAYYYYYYYY back in 1996 at Lollapalooza. I wonder if they'll come up with anything original? I'd love to hear something that fused their styles.

I think I saw Cypress Hill at Woodstock '94, aka the only good newer one... I wouldn't have seen any rap at all if it wasn't for my brother who is 5 years younger than me. He was growing up right around the time that rap was really gaining popularity (at least in my neck of the woods), later '80s and early '90s. I'm interested to see what they do.
"Searchers after horror haunt strange, far places..." ~ H.P. Lovecraft, "From Beyond"

I've seen cypress hill over 10 years ago opening for a link in park concert. They were GENIUS!!!! 7 ft bong cones wheeling out, lead singer gets a ladder to hit it! Not going to lie, I only know 1 or 2 of theirs. I know I like what ice heard, and live they blew the place apart, AND threw nickel bags in the crowd! The place went crazy! The big black dude with him just hit thatcshit without a boost, badass in every way. I'll never forget it.

So this group should be over the top!

interesting combo. :/
we are, what we allow to occupy us..

Prophets of Rage: Inside New RATM, Public Enemy, Cypress Hill Supergroup
How Rage Against the Machine, Chuck D and B-Real united for one of the most anticipated groups of the year

I won't lie. I'm waiting up to see what twitter says about the show.

public rage against the cypress machine..

nah, sounded better in my head

I remember when RATM broke up for the first time and there was a very strong rumour that they were going to get B-Real to replace Zach. Looks like it's finally happened.

I'll be listening out for this stuff. Can't wait actually!

Apparently they did a show last night together. I heard some samples from it on the radio this morning. They sound really good!

Prophets of Rage - Unfuck The World