omfg... that was brilliant. thank you so much.

my entire personhood equating to your dick... and so many other lines. i can't deal with how good this is.

i slowly felt the conviction, the anger, all of the emotion. it was like a flood. there was energy hitting me through the pixels.
im not even going to lie, as a man, i felt like that was a hard last 2 minutes to sit through. like i had to eat what she was serving, appeasing or not.
wow, idk.. that was real. i dont have any more words.
we are, what we allow to occupy us.. 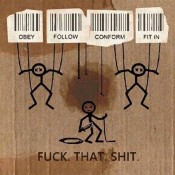 i slowly felt the conviction, the anger, all of the emotion. it was like a flood. there was energy hitting me through the pixels.
im not even going to lie, as a man, i felt like that was a hard last 2 minutes to sit through. like i had to eat what she was serving, appeasing or not.
wow, idk.. that was real. i dont have any more words.

all i think is damn.. thats a fucking shame, that she is in some way aware of a mass of.. yet small sect of 'Manhood', by that i mean the group of men that have a certain mindset which is to have a subordinate position for women to which is deep seeded across the globe..

WERE NOT LIKE THAT ... I know everyone understands that but the opposite is as everyone knows is "The Nice Guy" which is equally distorted as the weak side of the hood of man.

NOT ALL MEN FUCK THE MOUTH.. and not all men cry when they make love ... We roll between the two like a a seesaw trying to balance.

That being said, anything that pushes against the negative wins a vote from me

it still tugged at u tho huh..

Sub terrain to the river that flows, fields across we wonder, dark forest behind, At the stream we lay the camp. Son of shaman, woman of the withes wine. Mushrooms as they grow for the man, tea as it brews for the wicked...and the universe binds, in a twisted rotation of pulling and pushing, waving... Moss as it is big, galaxy dwelling and pulsating within eyes of iris... Distorted dimensions of hypermension snippeds of forgotten time, that oozes from the wry core of humanity... What a lovely day

Yes yes. All the yes.

I love the way she takes back her power in this piece. Challenging misogyny while also embracing her sexuality, demanding that her body is hers to do whatever and whomever she wants.

so much of this resonates with me.
Top

I can't help but feel kinda bad for her. Like the whole bitterness thing. If you have the right partner orgasms are basically guaranteed/reciprocated. It becomes a physical manifestation of the emotional connection. Oral sex should be a fun way to wake ur man up in the am not a way to fulfill an obligation. I've been in her shoes though & I understand her frustration but I realize that its only that way if its not the right one. Like if its not natural, or they don't make you wanna bring out your inner porn star, its not worth the time.
Never apologize for being nerdy because non-nerdy people never apologize for being assholes - john barrowman

Hi, I'm a slut.
Not so much anymore, I get what she says, when I was, I embraced my inner slut and was empowered by my own sexuality. But I have been on the other side as well. The uncomfortable place, where certain men expect you to do things to them, for them. That is a very dark place to be. As I get older I learned to dismiss views from people like that. I may be privileged enough now that I don't run into people like that anymore, and when I do, I give them hell. So far, I haven't got my ass kicked yet.
Live today, 'cause if you don't, you might live to regret it.... Amanda Marshall